The Internet of Everything in Service to the Blind 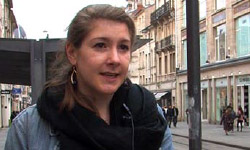 As cities build sensors and data systems into infrastructure, a team of innovative Cisco Networking Academy students realized that a blind person’s white stick could become a smart stick. With mentoring and support from Cisco, they developed a prototype device to transform the urban experience for people without sight.

When Devices, Data, and People Connect

Students in an entrepreneurship class at University of Lorraine in Nancy, France were stumped when their professor told them about Le Défi Cisco a competition to apply technology to social and environmental issue. Lucie d’Alguerre thought of her uncle, who is blind. She imagined a fully connected city that could transmit information to the white cane many blind and visually impaired people carry. Her professor connected her with 4 other Cisco Networking Academy students to develop a pitch for the contest.

A Formidable Team of Engineers

Thirty teams competed in the first round of Le Défi Cisco. On Team Handisco, Florian Esteves and Mathieu Chevalier took the lead in developing the technology. Lucie used her connections to build partner relationships with the City of Nancy and Valentin Haüy, an association for the blind. Jonathan Donnard managed communications with Cisco, while Nicolas Frizzarin took responsibility for the financials and the business plan.

Their idea is to integrate Internet of Everything technologies inside a single cane. According to Lucie: “Handisco is a start-up whose purpose is to help blind people move within cities, thanks to a cane, with greater independence and safety.”

“They’re engineers. They got excited about connecting the city with 5000 access points,” explained Rémi Philippe, a Cisco solution architect involved with the startup community in Paris who guided the team as a technology mentor. “We pushed them to define investment, timelines, and look at potential competitors. No other company is focusing on the white stick, so they could get traction and solve a true problem using existing infrastructure.”

The Handisco stick uses proximity captors with ultrasonic waves like those in a car bumper that emit a sound when backing up. The waves sense a wider spectrum of area and convey the information to the user through vibration. GPS technology provides local guidance, prioritized for real time conditions and a sightless traveler.

“I’ve seen 50 or 60 startup pitches, and no one did anything like this,” said Rémi Philippe. “It’s the best example I’ve seen of the Internet of Everything. It’s a dumb device that becomes smart when it connects to all the other data and devices around it to make a real difference for the user.” In the final round of Le Défi Cisco, the Handisco team received the top honor and a €70,000 award.

From Student to Startup

What began as a class project turned into an innovative startup. Five students who barely knew each other are now business partners. With the prize money from Le Défi, they founded Handisco and began to pitch the company to investors. The team has developed a sustainable distribution and pricing model to move into other markets such as the elderly. In June 2014, the group received the Pepite Award, a National Prize for Innovation from the French Ministry of Education, and were honored to meet with French President François Hollande.

Remi Sedilot, a Cisco sales manager who advised them in business plan development, believes they won the contest because they are solving a real problem with a true innovation that builds on existing infrastructure. “They were very precise and consistent about what they would like to do,” he said. “They are proposing to help blind people gain autonomy and benefit from services created for other purposes.”

The next wave of technological innovation will come from the connection of people, process, data, and things to the Internet: the Internet of Everything. For students today, the opportunities and potential for innovation are limitless and daunting.