Community spirit and the love of technology brings recognition to student from the slums of Kenya. 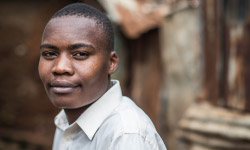 When Stephen Ondieki Orioki took the IT Essentials course at the Raila Educational Centre, he began his journey from the streets of Kibera, a slum surrounding Nairobi, to successful entrepreneur and international ambassador for the Cisco Networking Academy program.

Nearly 200 slums surround the capital city Nairobi in Kenya. Lack of access to education and technology limit opportunities for the young people who grow up there. In 2007, the Raila Educational Centre brought the Cisco Networking Academy program to Kibera, the largest slum in Kenya. Hital Muraj, Cisco Networking Academy Regional Manager for East Africa, envisioned a network of self-supported educational centers that could offer Cisco IT Essentials course for free, or at a very low cost.

During the first week, 80 students registered for Networking Academy courses like Cisco IT Essentials. The result was transformative.

An Entrepreneur Multiplies the Impact

When Stephen Ondieki Orioki completed the IT Essentials course and free business training at the academy, he realized that he could open his own computer centers. Stephen borrowed money to purchase a computer and open a repair shop in his home. He leveraged his profits to create 3 computer centers with 30 computers and now employs people to support the centers. He completed his Cisco CCNA and CCNA Security and works as a Network Engineer at Computech.

He invites young people to play computer games and learn about technology in his centers. They choose the center over gambling and the temptation of drugs in the street. “It's a place for them to socialize and think more positively“, he explains. “Most of them can relate to me because I grew up in the neighborhood. They see me overcoming the same challenges they face and they're motivated to try to make some changes themselves.”

From Kibera to Oslo as an IT Ambassador

More than 400 students have completed courses at the centers, with an average of 30 students attending each class. Stephen’s community spirit, entrepreneurship, and love of technology earned him a trip to a Nobel Peace Prize Award ceremony. “Stephen’s achievements inspired the selection team in the United States,” says Muraj, “and they chose him to represent the entire African region at the awards.”