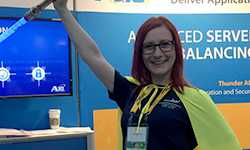 Kwame Ohemeng and Zoe Rose did not expect to become IT networking professionals. Yet, they both went from being IT tinkerers to working side-by-side with Cisco engineers to build a massive network for Cisco Live as members of the Networking Academy Dream Team.

DIY Networking Leads to a Passion for IT

Both Kwame’s and Zoë’s interest in computers began with a video. At his home in Ghana in 2010, Kwame struggled to connect 2 computers. “I spent one night reading about computers and watching YouTube videos, and learned I could use a flash drive to solve my problem,” he said. The next morning, he created a wireless security key on his flash drive and linked the computers over a network.

Thousands of miles away, in Winnipeg, Canada, Zoë confronted a different issue. Like Kwame, she turned to the Internet for answers. “I worked at an accounting firm, where I spent my time filing personal taxes,” she said. “I immersed myself in work, found I could make things in the office run smoother through IT management, and decided to learn everything piece-by-piece through YouTube.”

Hands-on Learning in the Networking Academy

Though they lived half a world away from each other, both Kwame and Zoë discovered Cisco Networking Academy. The Networking Academy curriculum helps students develop technical mastery and build critical thinking and problem-solving skills through an online curriculum, trained instructors, and hands-on practice. By enrolling in Networking Academy courses at local learning institutions, they became part of a global community of learners.

Determined to find a more fulfilling job in networking, Zoë enrolled in Cisco CCNA courses at Red River College in Winnipeg, Manitoba and is currently pursuing her Cisco CCNA certification.

Kwame spent 6 months learning networking basics at an academy in Ghana. He worked for Ghana Television for 2 years, until he emigrated to the United States to complete his studies and continue his networking career. He enrolled in the academy at Gwinnett Technical College in Atlanta, where he earned his CCNA certification.

Real-world Experience with the Dream Team

Networking Academy instructors nominate their best students to join the Dream Team, a small group of students selected to work side-by-side with Cisco engineers at major events. Hundreds of clicks and hours of study later, that’s how Kwame and Zoë finally met face-to-face at Cisco Live in San Diego, California.

“Being a part of the Dream Team teaches you so much more than how to build a network or install a router,” Zoë said. “It taught me organization, teamwork, and the value of good coworkers. It’s just so much fun.”

Cisco Live is Cisco’s premier education and training event. More than 25,000 Cisco customers and partners gathered in San Diego for the U.S. event and the group expected top-notch network connectivity. The Dream Team worked with Cisco to deliver it. Kwame, Zoë, and the rest of the Dream Team supported the Network Operating Center (NOC) team in installing 1,250 access points throughout the San Diego Convention Center and two hotels, establishing a conference-wide network with 99.9% uptime.

“I had the opportunity to work with some of the sharpest guys in the world,” Kwame said. “To be able to build such a large network for Cisco Live has been the best experience I’ve ever had as a student.”

Rob Neumann, a Senior Technical Advisor at Cisco and head of the NOC at Cisco Live, was impressed with the Dream Team’s skills and technical expertise. “Cisco Live’s partnership with the Cisco Networking Academy Dream Team has proven to be extremely successful over the past several years,” he said. “The team's knowledge of networking and of Cisco solutions allows them to provide valuable onsite assistance to quickly troubleshoot and resolve issues that arise during the event.

More than 1 million students participate in Networking Academy courses around the world each year. To learn more about connecting to the IT talent pipeline and partnering with a local academy, go to Get Started: Employers.